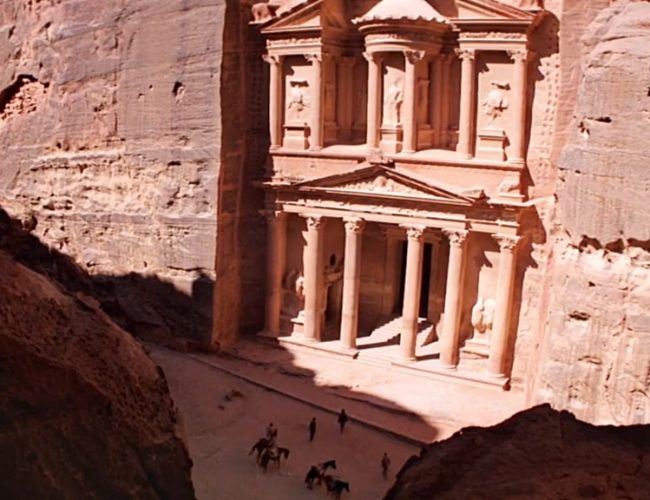 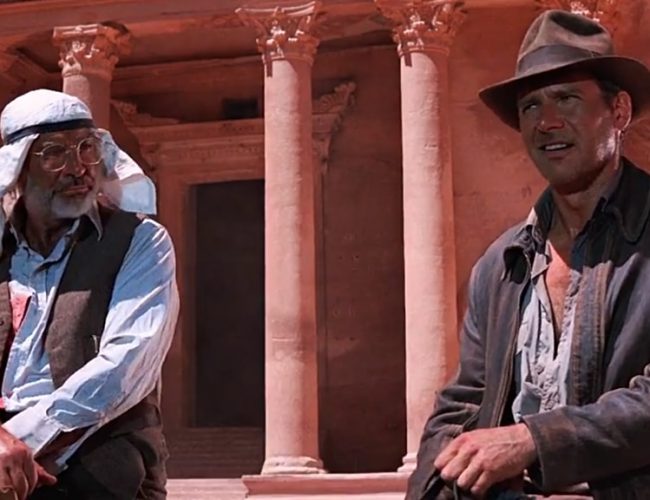 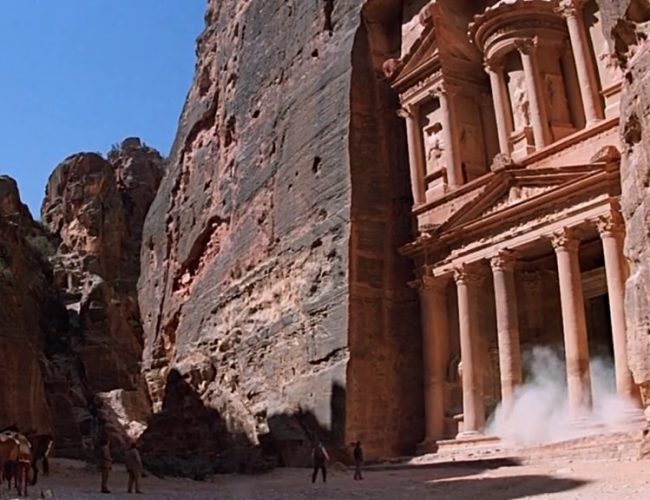 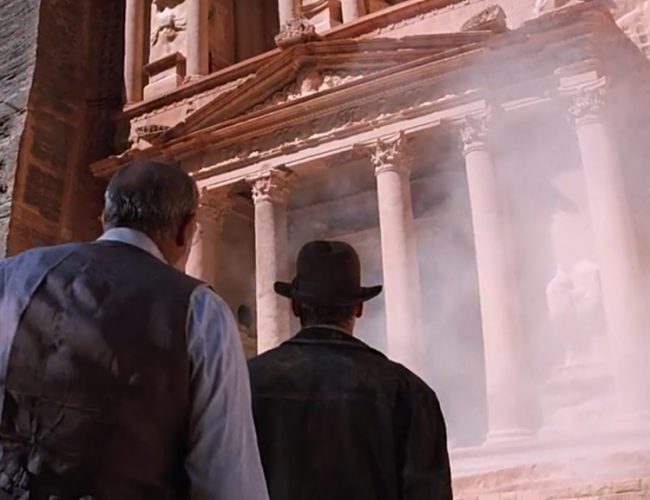 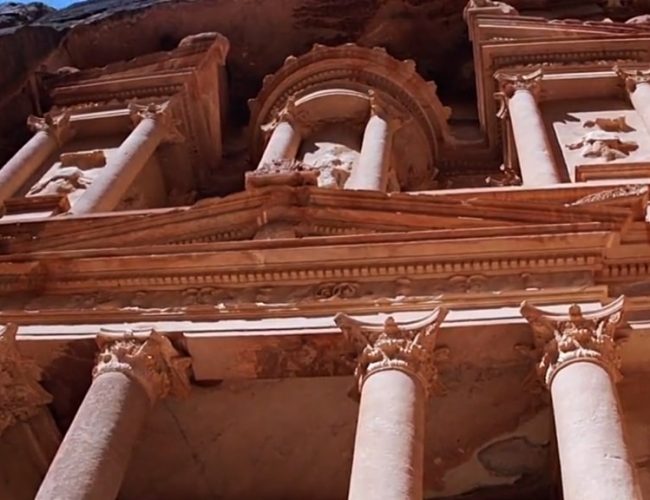 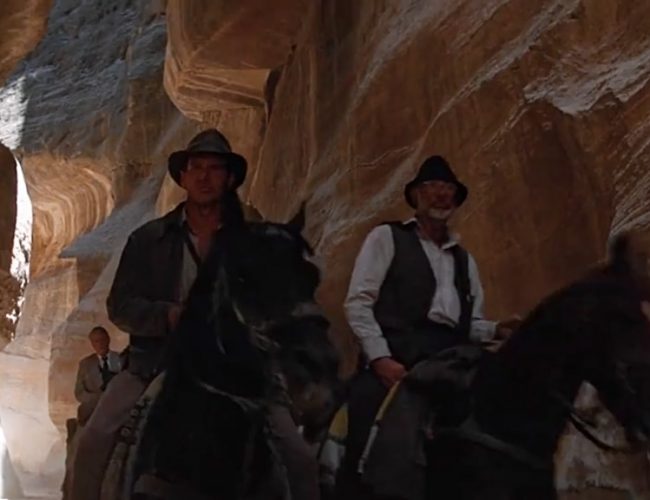 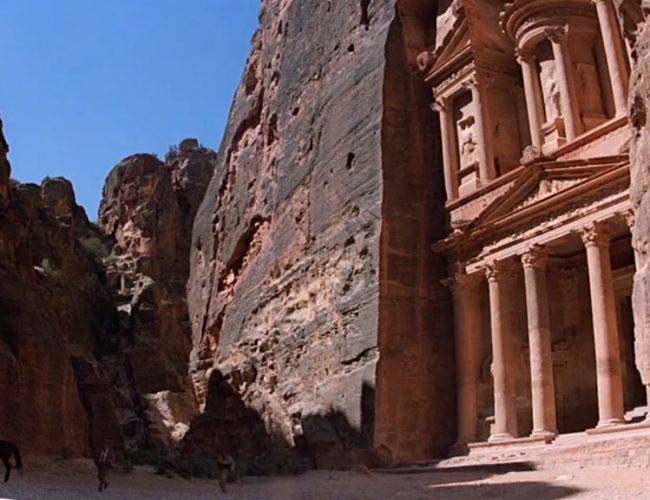 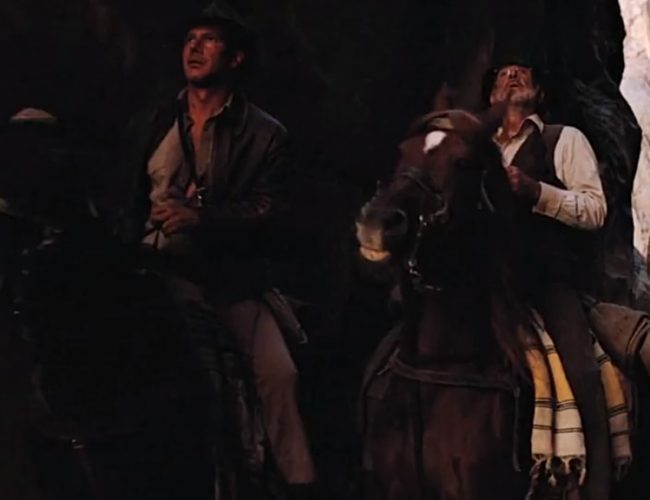 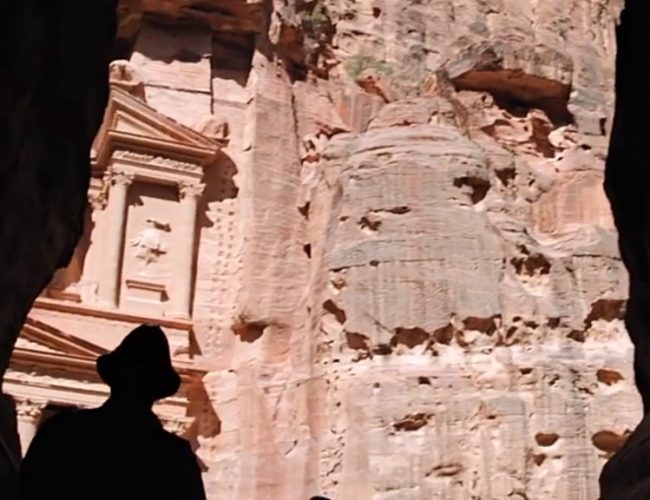 The search for the Holy Grail brings Indiana Jones and his father to the Temple of the Sun also known as the Holly Grail temple. The real temple was carved into stone in the 1st century AD in what is now Jordan. To find the exact filming location read on or click on the map pointer in the image section above.

Where did they film the “The Holy Grail Temple” scene?

The Holy Grail Temple, also known as the Temple of the Sun, is actually Al-Khazneh (Arabic: “The Treasury”) and is located in the ancient city of Petra, Jordan. They call Petra also the Lost City because a Swiss scholar found it in 1812 after it was forgotten for centuries. Today Al-Khazneh is one of the most known touristic sites in Jordan along with other ancient structures in Petra. The nearest town to Petra is Wadi Musa which is also the administrative center of Petra, only an hour away by foot. The Canyon of the Crescent Moon from the movie is a breathtaking sandstone canyon called Siq, which is the nearest way from Wadi Musa to Petra.

The ancient city of Petra is a UNESCO World Heritage site since 1985, and since 2007 it is on the list as one of the new seven wonders of the world.

You may enter the Lost City only with a valid ticket, which you can purchase at the visitor center in Wadi Musa. The visitor center shouldn’t be hard to find since it is where the path from Wadi Mus to Petra begins. For more information about the tickets and the fees click here.

Organized Tours to Petra in Jordan

There are organized tours to Petra from
different major city's in the area.

The scenes filmed at Al-Khazneh in Petra:

Indiana Jones and his party arrives at the temple

The first scene on this location is when Indiana Jones (Harrison Ford), Professor Henry Jones (Sean Connery), Marcus Brody (Denholm Elliott) and Sallah (John Rhys-Davies) are riding through the canyon. When they arrive at the Temple they dismount the horses and they approach the temple.

Indiana Jones with his party in front of the temple

You see the party running out while there is a big cloud coming out of the temple. While mounting the horses Henry calls Indiana: Junior which makes Sallah ask what Junior actually means. Henry explains to him that Henry Jones Junior is his real name and that Indiana was the name of their dog. Sallah seemingly amused by this bursts into laughter while Indiana explains that he was very fond of that dog. Markus then shouts to the others they should follow because he knows the way and disappears in the narrow canyon. Henry remembered that Markus got lost even in his own museum so everybody started galloping after Markus. 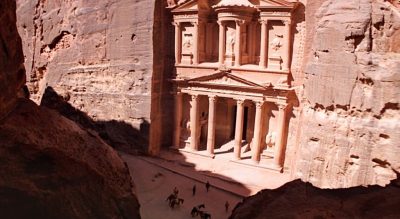 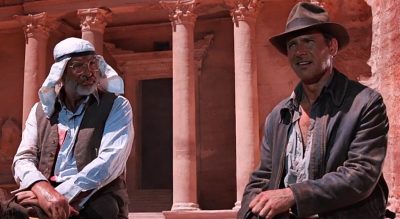 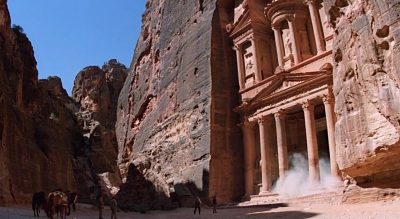 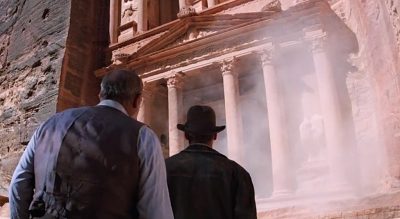 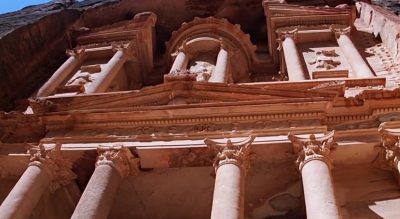