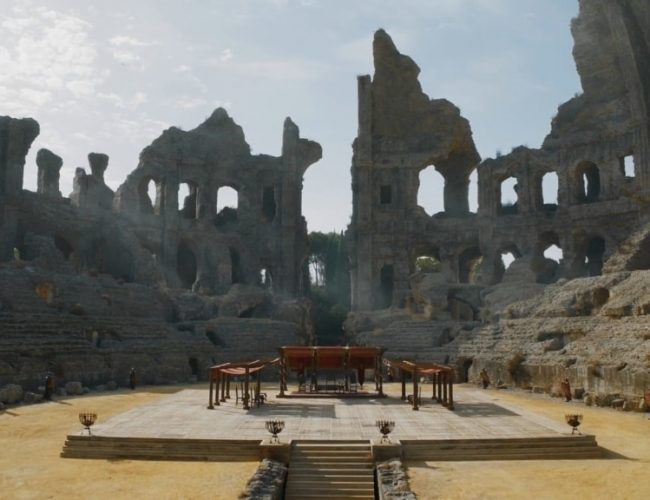 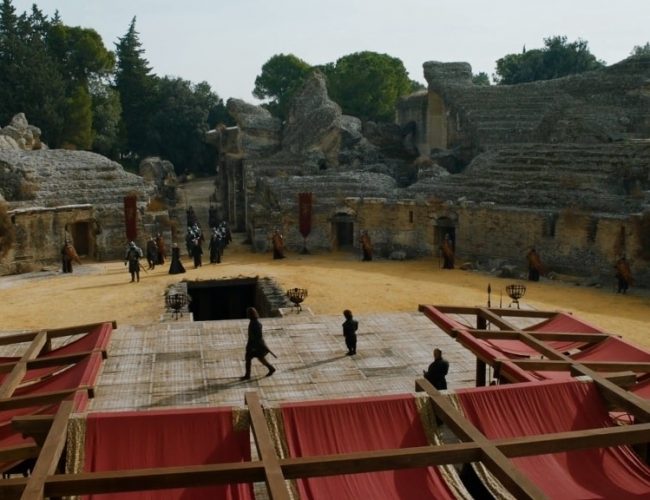 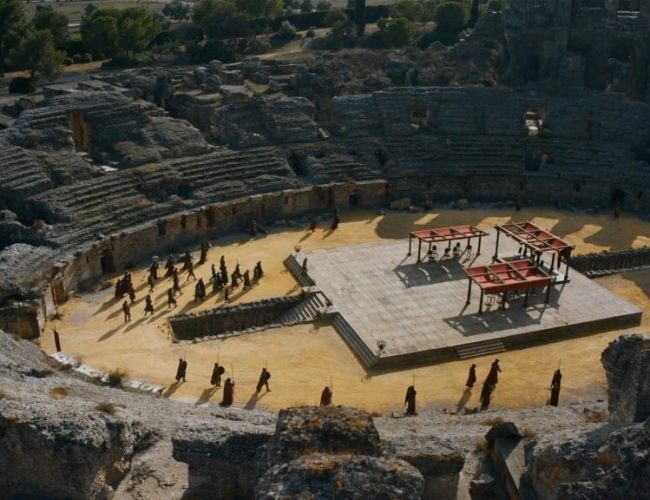 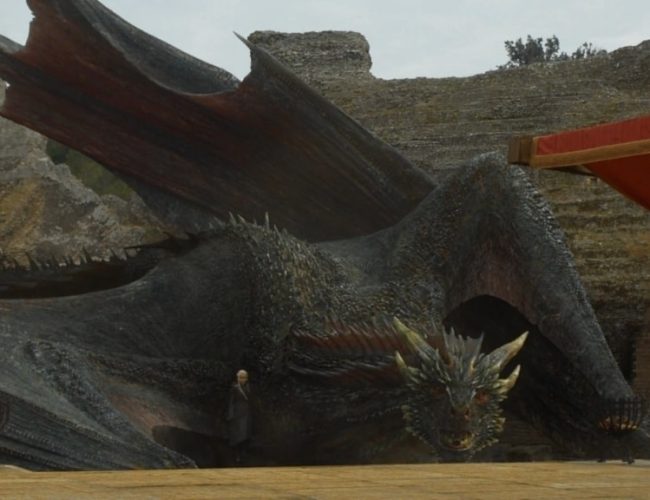 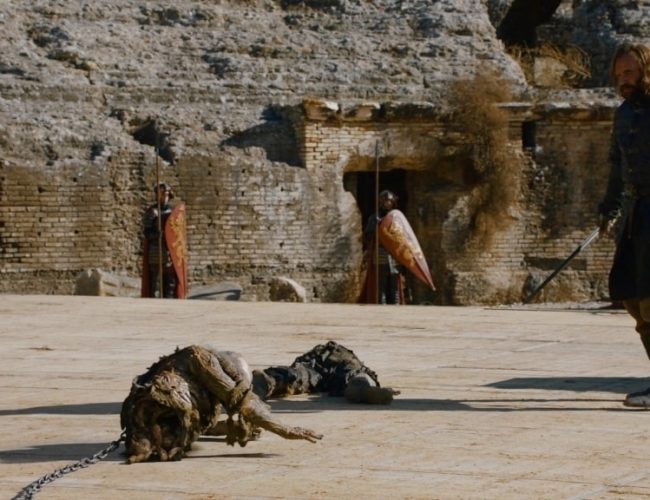 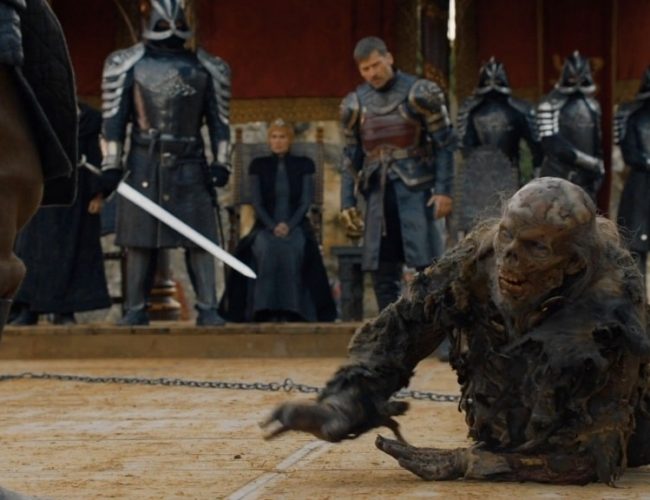 The Dragonpit is a big ruin in King’s Landing which housed the dragons of House Targaryen. The ancient Roman arena which stood in for the Dragonpit is located near Seville, Spain. To find the exact filming location read on or click on the map pointer in the image section above.

“There’s only one war that matters. The Great War. And it is here.”

Where did they film the Dragonpit scenes?

The ancient Roman amphitheater ruin that represented Dragonpit in Game of Thrones is the amphitheater in an ancient city called Italica. The ruins of Italica are only 5.6 miles (9 km) to the north of Seville, Spain.

For the Game of Thrones scenes the pit beneath the amphitheater was covered with a platform. Both delegations of the Dragonpit summit sit on this platform in the middle of the amphitheater.

About the ruins of Italica near Seville

Italica is known to be the birthplace to three Roman emperors Trajan, Hadrian and possibly also Theodosius. The city was founded in 206 BC for housing Roman veterans from the Second Punic Wars against Hannibal and the Carthaginians.

The amphitheater in Italica could hold up to 25.000 visitors and was the third largest amphitheater in the Roman empire at the time. Besides the beautiful amphitheater, you can see a Roman theatre, a temple, beautiful mosaic floors, and other remarkable and well preserved ancient buildings.

There are guided tours to the ruins of Italica with the option of skipping the lines and a private guide -> Get Your Guide here!

The scene filmed at Ruins of Italica near Seville:

The summit at the Dragonpit

Daenerys Targaryen and her followers meet with Cersei at a parley to discuss their common enemy, the Whitewalkers. Everyone is waiting for Daenerys as she makes a dramatical appearance at the Dragonpit on the back of her Dragon. While Tyrion is being provoked by Euron Greyjoy Cersei stops Euron ant wants to know what this summit is about. Because Tyrion knows he can’t convince his sister only with words he lets Gregor Clegane bring out a crate which he puts on the ground and opens. A wight jumps out and starts to run towards Cersei, but he gets stopped by Gregor who poles it back with the chain wrapped around wight’s neck.

Jon Snow steps toward the wight and explains it can only be killed by fire or dragon glass.  Then he takes a dragon glass knife and he kills the wight. Cersei finds out that Jon, as the King in the North, has already pledged his allegiance to Daenerys. Cersei who first agrees to the proposed trust with Daenerys is angry, that the North has already pledged the allegiance, that’s why she calls off the trust. She adds that she will deal with whatever remains in the north after the White walkers are done with them. Then she and her followers leave.

Find all the things you can do in Seville

Find a suitable hotel in Seville 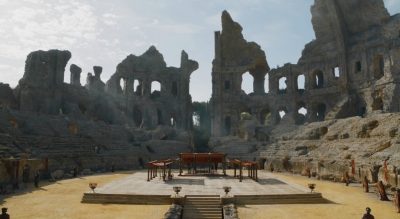 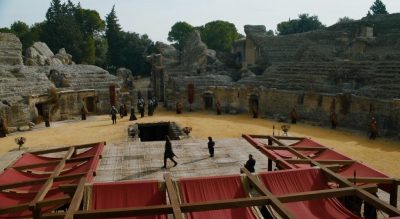 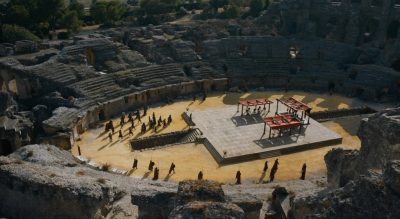 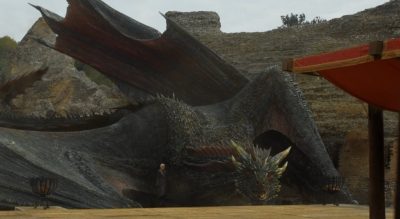 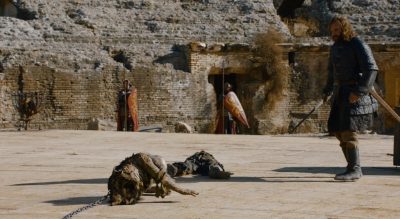